Some fascinating pictures of the hydro-geomorphological formations in Nighoj that a friend had posted on Facebook, coupled with the fierce desire to hit the open road compelled me to wake up unusually early one Saturday morning, and chance the question, ‘Let’s drive to Nighoj?’ Of course, I assume the ‘pleeeeease’ i added may have had some persuasive power – even if only through encouraging shutting me up with a hasty yes, yes, ok.

After a few minutes of putting together an uninspired picnic basket of sandwiches, potato chips and water, we were on the road. It was breaking dawn when we started out. Perfect. There’s something magical about driving down a lonely road under the faint glow of streetlights, and watching the world slowly grow brighter.

We’d looked up google maps, and set the phone GPS, which kept us on the right track – until the battery died. Brilliant. We’d reached Morachi Chincholi at this point, a place where peacocks are said to be found in abundance. So naturally, we saw one. 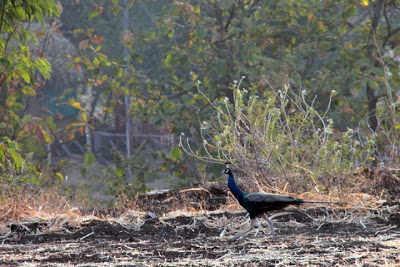 We didn’t stop to scout out more, as Nighoj was our place of interest. Drove on, lost our way, but found it after a kind guy on a bike guided us to the turn we should’ve taken a kilometer or so back. We finally crossed a pretty bridge, to arrive at our destination.

The river Kukadi flows through Nighoj village, and at one place, roughly 2-3 km away, near a temple, it cuts a deep gorge. This is the place we stopped at. 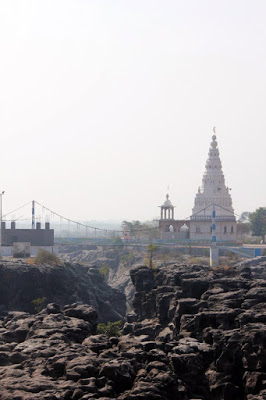 There’s nothing much to see there, except the potholes, which are, apparently, Asia’s largest, thereby gaining them entry into the Guiness Book of World Records. The potholes are caused by the swirling, erosive action of water and pebbles carried by the river, on the basalt rock over an extended period of time. The potholes so formed are smooth and roughly circular. They can be seen best during the summer and winter months when the water level is low. 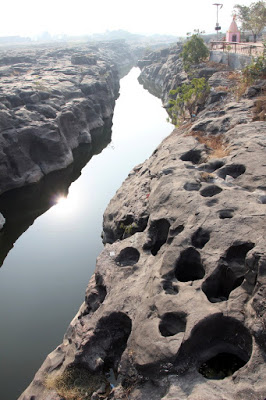 We spotted some unusual nests built under the rocks, and some little birds flying around them. Swallows perhaps? We saw a few water snakes in the river too.

We didn’t visit the temple. We walked a short distance down the river instead. The rocks were smooth and a tad slippery, and the potholes, simply captivating! I captured the essence of the place on video while the kid displayed some latent mountain-goat tendencies as he jumped, sure-footed, from one rock to another.

If you’re headed there sometime, make sure you carry food and water, because there are no shops out there. No shade either, so a cap might be handy. And if you’re bringing kids, putting them on a leash might save you the tachycardia that occurs when they venture too close to the edge. 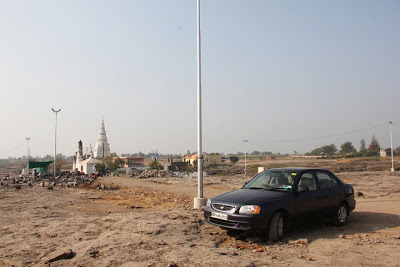 We started back from Nighoj at around 10am. The way back seemed faster, and we got home by around noon. It was a Saturday morning well spent, if you ask me. A ‘whole’ lot of fun – on the rocks!