A blog that documents my travel experiences, adventures and life's little moments. Where the joy lies in the journey.

There are plenty of ponds close to where the extended family stays, at Salt Lake City, Kolkata, that paint a picture of beauty and serenity when viewed from the noisy, trafficky chaos of the Eastern Metropolitan Bypass.

I hadn’t known they were fish farms until I actually visited some of them, and hadn’t know until much later that they played a major role in the city’s wastewater treatment, collection of rainwater and the preservation of biodiversity, all through the balanced functioning of an elaborate ecosystem. This unique ecosystem uses wastewater to provide valuable nutrients for fisheries and agriculture and in the process purifies it, thereby enabling natural sewage treatment for the city. These ponds, both brackish and freshwater, are locally known as ‘bheris’ and form part of the extensive East Kolkata Wetlands, hosting the world’s largest sewage-fed aquaculture.

The significance of the East Kolkata Wetlands as a resource-recovery system cannot be understated. Along with the sewage-fed bheris, they also include rice paddies and garbage farms that grow fresh vegetables. The Ramsar Convention, in 2002, recognized the East Kolkata wetlands as a ‘wetland of international importance’.

We visited the Bhery Fisherman’s Co-operative Society Ltd. and found a number of ponds, both large and small, separated by mud banks and fringed by a dense growth of water hyacinth. Numerous coconut trees growing along the edges of the ponds enhanced the overall beauty of the place. 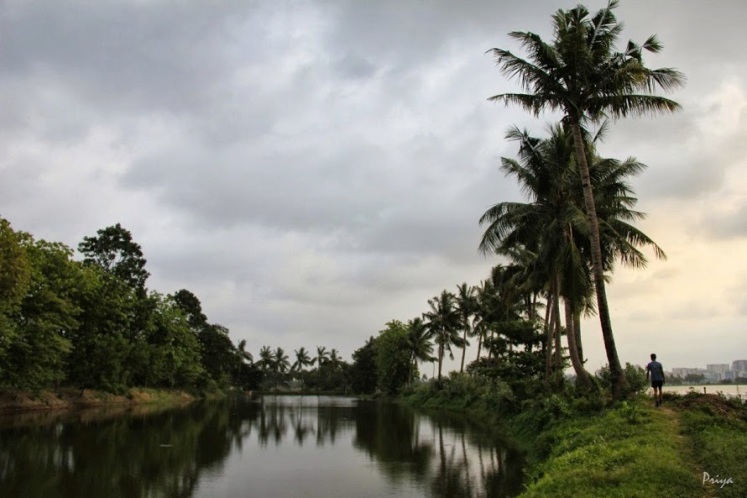 But the first thing to hit us had been the unpleasant odour. It had almost made us miss appreciating the beauty of the ponds under whose almost-clear surface numerous fish swam by hastily.

Well-worn foot trails on the narrow mud banks led us to the larger ponds that were out further away. We were there at around 6am; early enough to see the fishermen at work in their boats. 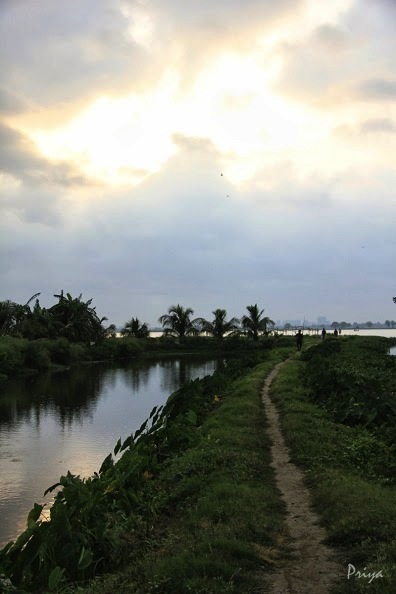 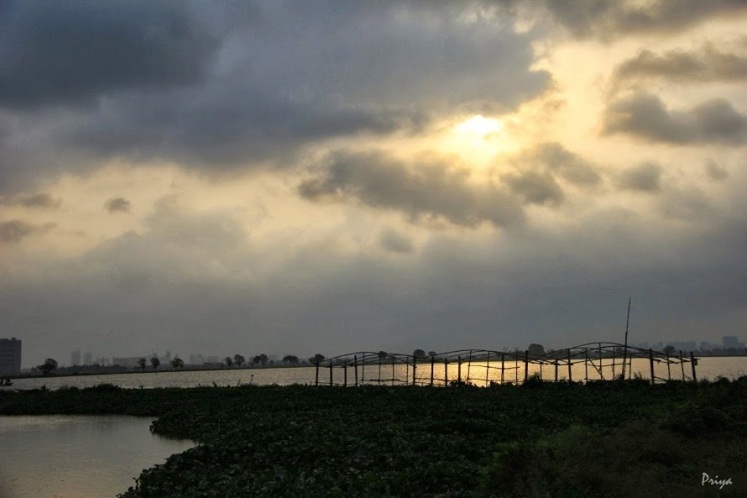 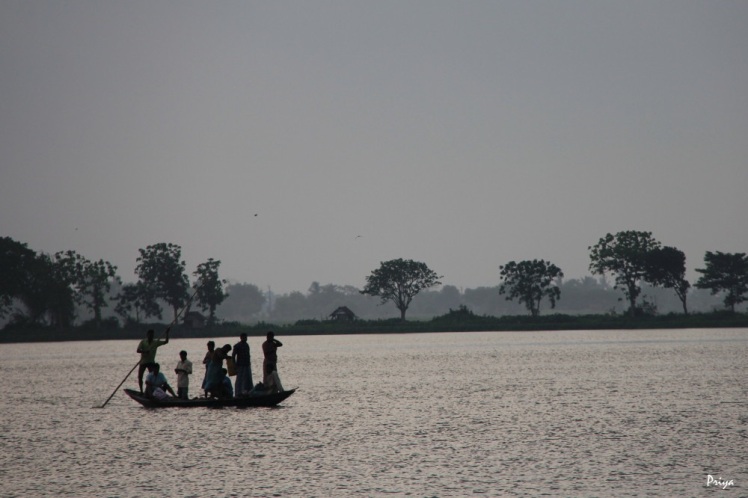 The water hyacinths growing thickly along the water’s edge prevent erosion of the banks by breaking the waves and acting as buffer between the land and water. They also provide shade to the fish during the hot tropical summers, and more importantly, leach the heavy metal ions out of the water. 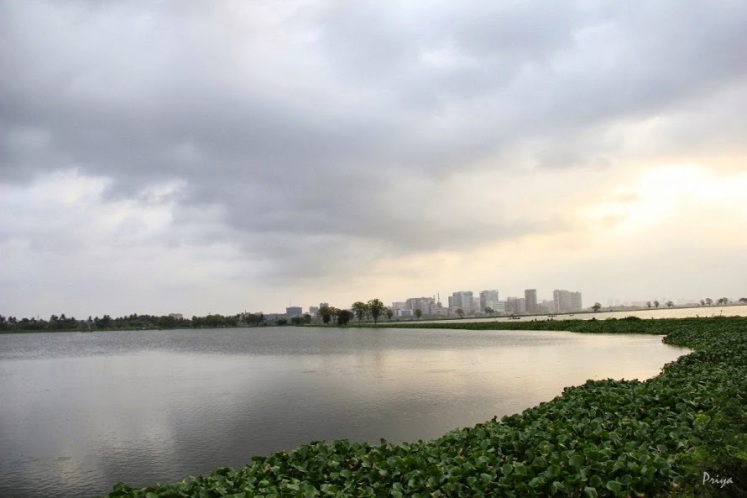 Fish farming is carried out in 5 stages. First, the pond is prepared during the winter months. Then primary fertilization is carried out, involving the introduction of wastewater into the ponds to allow for natural purification. Fish stocking is next, whereby the fish-farmers stock a small number of fish to test water quality. If satisfactory, the stock is increased. The next phase is secondary fertilization, which involves a patterned introduction of nutrient-rich wastewater into the ponds in keeping with the lifecycle of the fish. Finally, the fish are harvested at various times in the year depending on the fish species.

These phases in fish farming necessitate the presence of three types of ponds – the nursery pond, the rearing pond and the stocking pond. The management of sewage flow in these ponds is key, and the proper supply and quality of wastewater determines productivity. 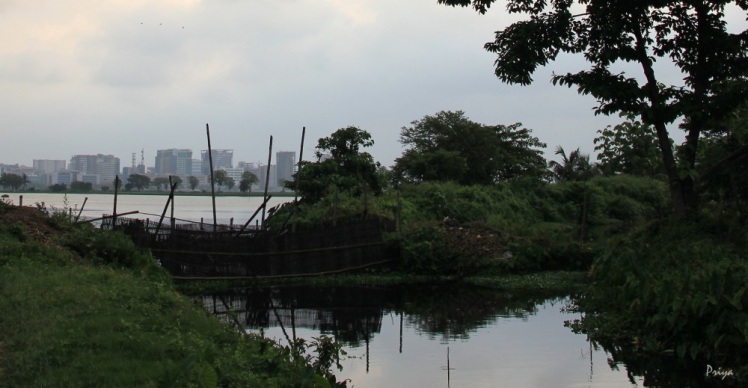 The fishermen bring in live catch in boats that are filled with water to a level, and people at the ‘dock’ deftly separate them based on type, into various cane baskets or cement tubs containing water. Freshwater fish are generally sold alive in the market. 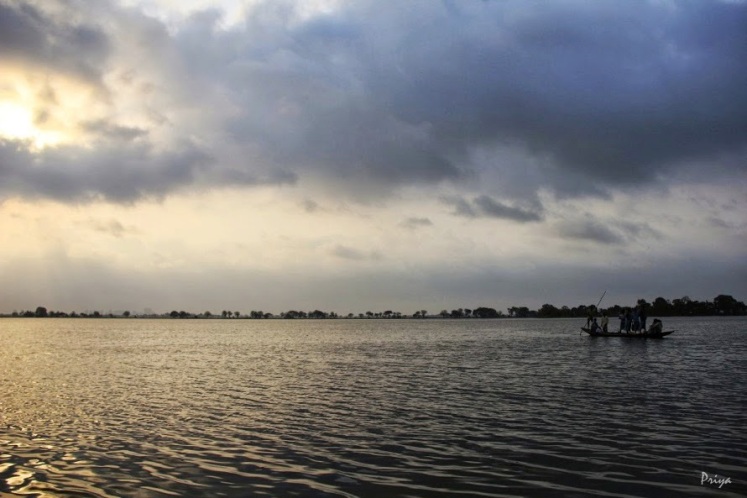 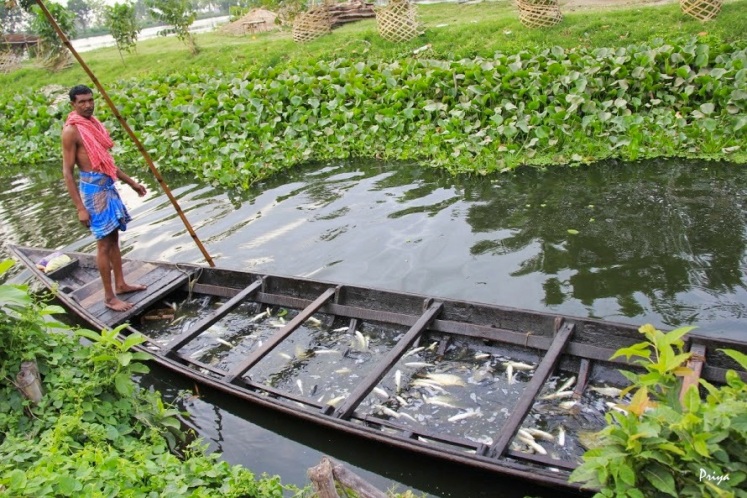 The East Kolkata Wetlands are currently threatened by urban development and the natural problem of siltation that causes a rising of the pond beds, thereby reducing fish production. 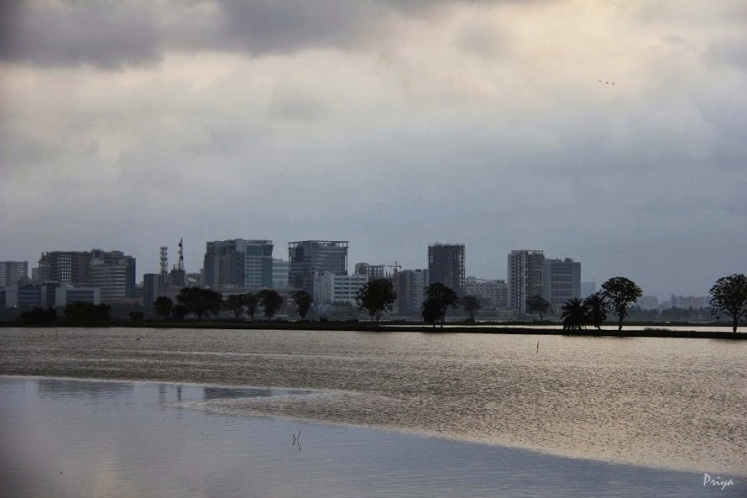 In the words of Dhrubajyoti Ghosh in his paper ‘Wastewater-Fed Aquaculture in the Wetlands of Calcutta – An Overview’:

“Immediate planning is needed to preserve the heritage of the Calcutta wetlands which are gradually being lost to urban expansion. The call for the preservation of the Calcutta wetlands originates from a public interest frame of reference for a resource recovery agro-ecosystem which has grown in symbiosis with natural biological phenomena and the city’s waste disposal. Losing the wetlands would be the extinction of this creative heritage of the farmers, the world’s largest system of resource recovery practices, and the only example of its kind in India if not in the world.”

5 thoughts on “Fish Farming in the East Kolkata Wetlands”

Been there, done that.