Think Goa, and you think beaches. But there’s so much more to Goa, as we recently discovered. If you look beyond the sand and the surf, you’ll find vast wildlife sanctuaries and forest area, where it’s cooler, less humid, and way more peaceful. 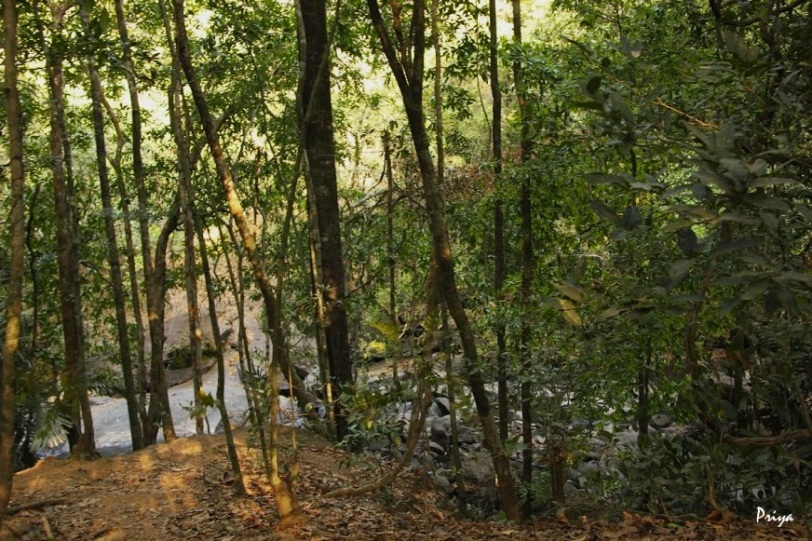 We drove from Pune to Goa on the 30th of December, to make it there in time for the New Year. After 11 hours on the road with rather extended stops for breakfast and lunch, we reached the Dudhsagar Spa Resort, somewhat close to the Mollem check post and nestled in the woods. The resort, surrounded by forests, arranges treks to the Dudhsagar Waterfalls, while offering the simpler option of driving you to it too.

We drove. (Although I hope to go back someday and trek the distance to the Falls, during the Monsoons.)

Driving to the Falls was a process in itself. The resort folks led us to a point in Mollem where we switched to a 4×4 jeep, for a charge of around 1600 Rs per vehicle. We also had to pay for compulsory lifejackets, regardless of whether we wanted to dip our toes in the water or not. 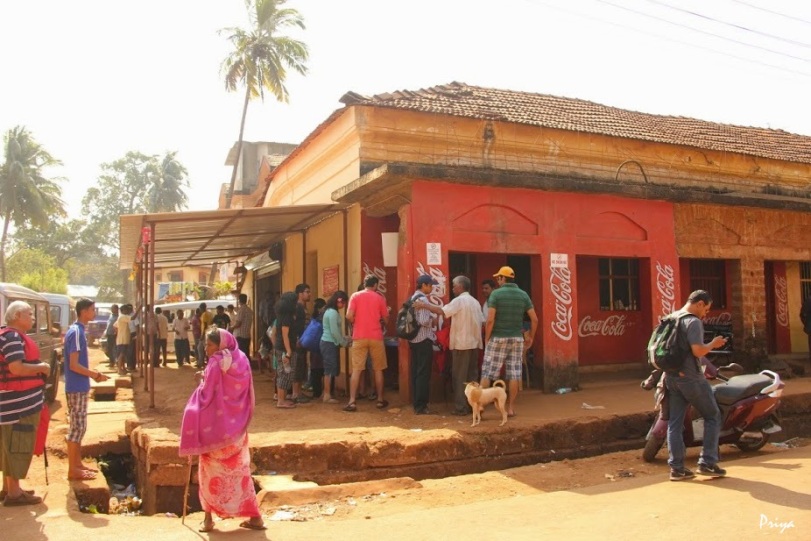 From here, we drove on to the entrance of the Bhagwan Mahaveer National Sanctuary, where we had to endure another 20-minute wait in a queue, for entry tickets. 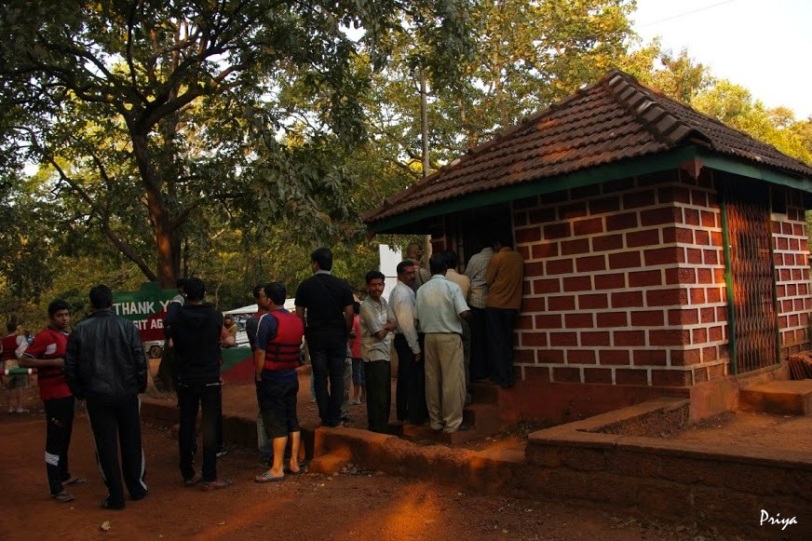 A rather bumpy but thoroughly enjoyable ride through the forest ensued. We also made our way slowly through the 4 or 5 streams we passed. This route is inaccessible during the monsoons due to the rising water levels in the same streams, and the torrential flow that could well carry you away with it.

We arrived at a small clearing of sorts from where on we trekked to the Falls, for about a kilometre. Cycles loaded with supplies were parked here for those who wanted to ride back through the Park.

The short trek was perhaps the most enjoyable part of the journey. We walked over boulders and bridges through the dense forest, passing signboards that cautioned against feeding the monkeys. 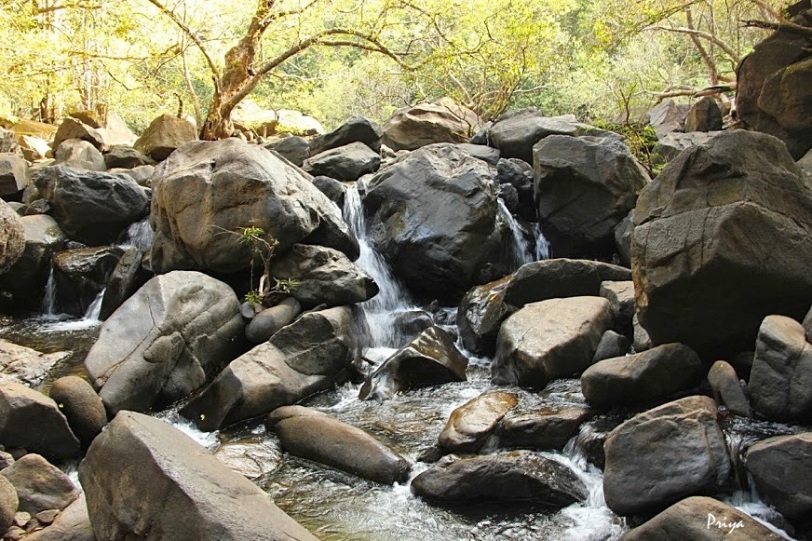 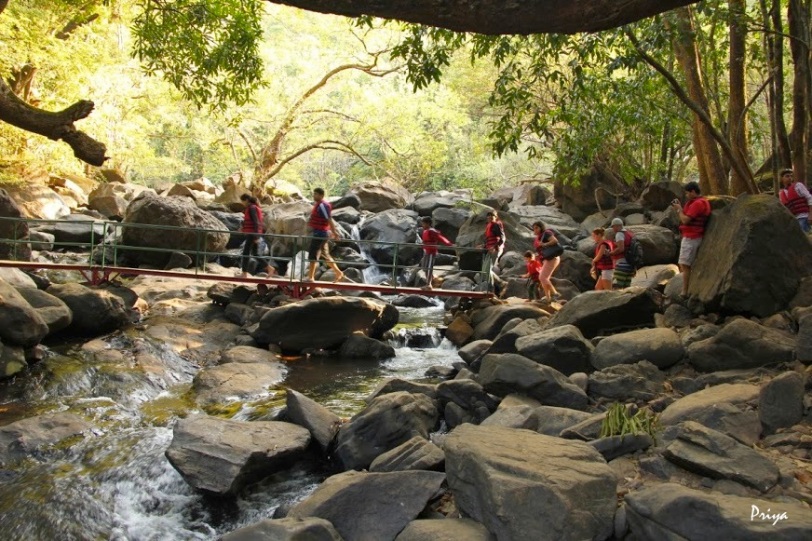 The Dudhsagar Falls appeared in view quite suddenly, and it was breathtaking. 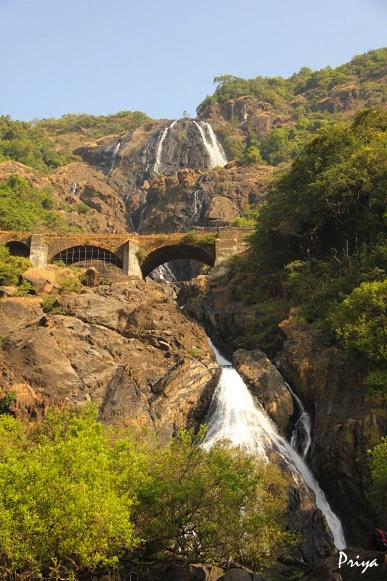 The water flowed down in various tiers, over a height of over 1000 feet, and although not much in volume, it was enough to look spectacular. (Of course, it will look way more magnificent during the rains!) 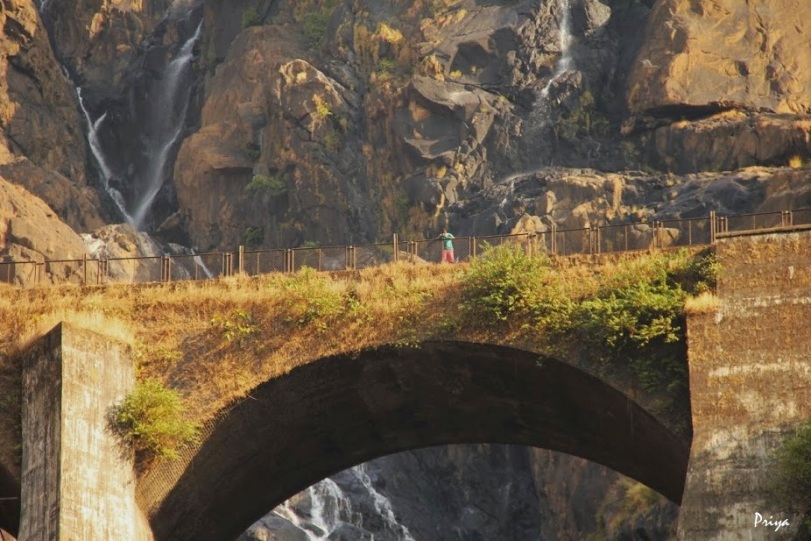 We walked further on till we came to a pool at the bottom of the Falls. High above us, a train chugged by, across the waterfall. Lucky for me I had my camera out! 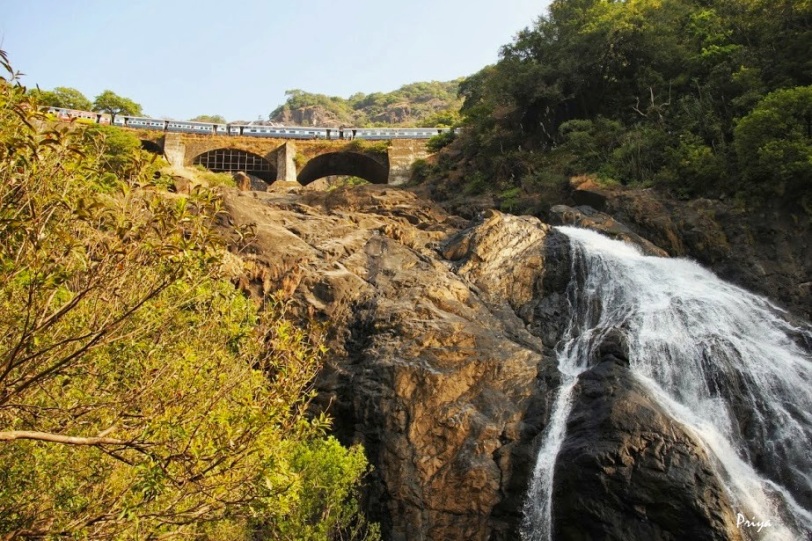 We spend around an hour here, sitting at the water’s edge, while many others took a dip in the pool. 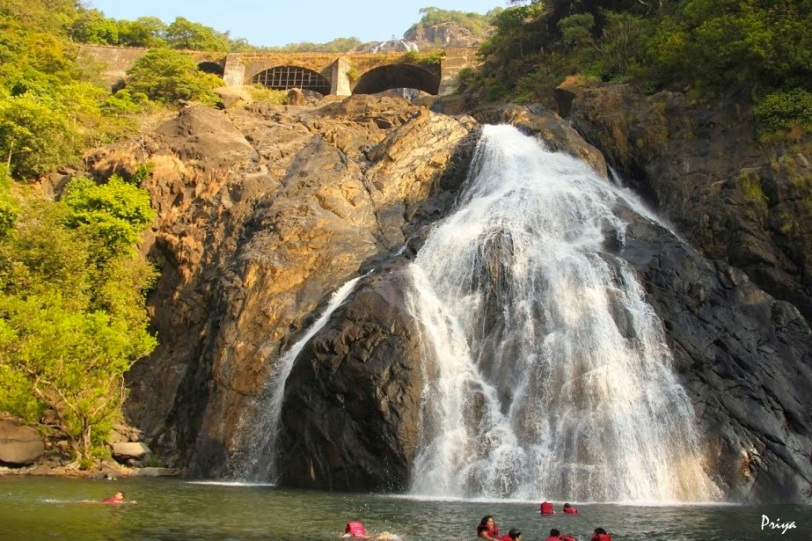 We made our way back to where the jeeps were parked, and retraced the same path back to the resort.

What we’d travelled over 400kms to see was accomplished within half a day. But then again, the experience, and the memories we carried back with us, made it all worthwhile.