The lovely, Monsoon weather, and a mid-week holiday presented the perfect opportunity to set out on a trek – again! My friends and I had trekked to Visapur Fort last, an excursion that had left some of us aching all over the following day. So this time, we chose Tikona Fort, an easy, scenic climb, as promised by the information gathered from the Internet.

We set off from Pune at around 8am, and drove to the fort via Kamshet. From a distance, the fort looked mystical, with the top shrouded by clouds. 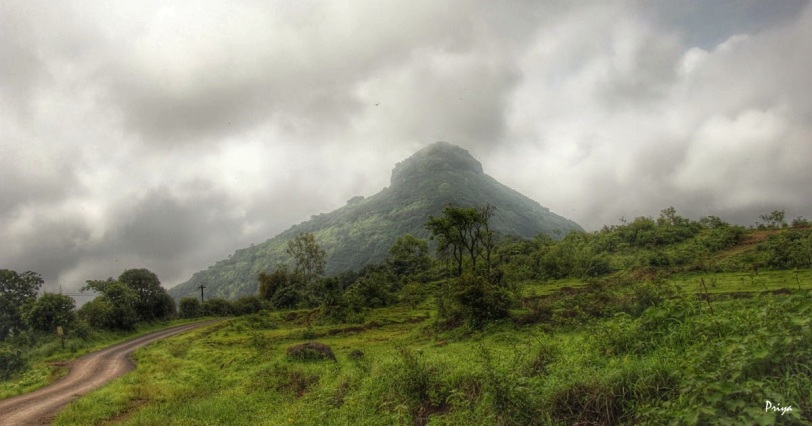 The fort gets its name from its pyramidal shape. Historically relevant, having changed hands from the Nizams to the Marathas, then to the Mughals and back to the Marathas, it was once the centre of control for the whole Pawna-Maval region, during the time of Shivaji.

The drive to the fort was scenic and very pleasant. We parked our car in a small clearing at the base of the hill and followed a dirt track that continued upwards as well-worn steps, somewhere early in the climb. Although it should not have taken us more than an hour to reach the top, we took two, because the fascinating flora and fauna along the way enthralled us, compelling us to stop and photograph them all!

Around half an hour into the climb, we arrived at a point where the path bifurcated into two, one going to the right, towards Tikona Fort, and the other headed left, along a narrow ridge to the neighbouring hill. 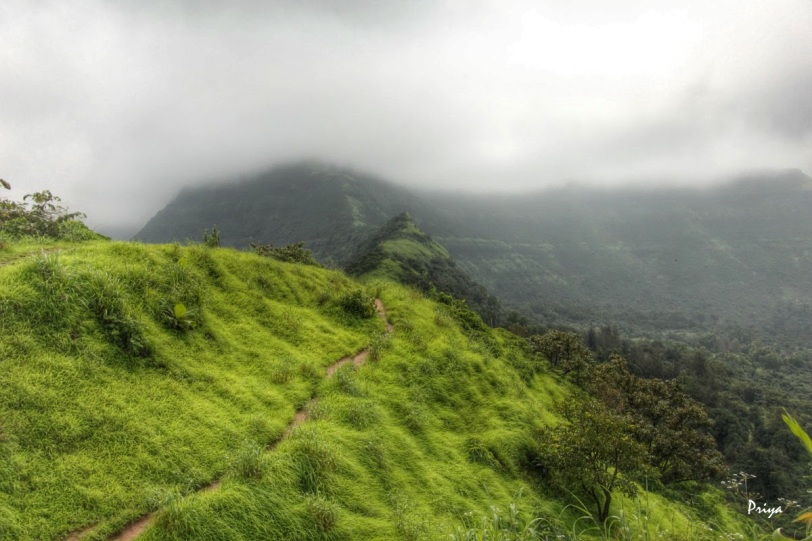 Although the trail leading to the cloud-covered hill was more enticing, we stuck to our original plan and turned right, towards the fort. We were not disappointed, because this side was as lush, green and beautiful as we had imagined the other one to be.

Further on, we arrived at a small cave. It was damp and lined with moss and lichens, but offered excellent photo opportunities! Tiny purple wildflowers adorned the outside of the cave.

Two massive stone structures welcomed us into the fort, a few metres ahead of the cave. There still seemed like a long way to go, but the ascent was gradual and the climb was easy. 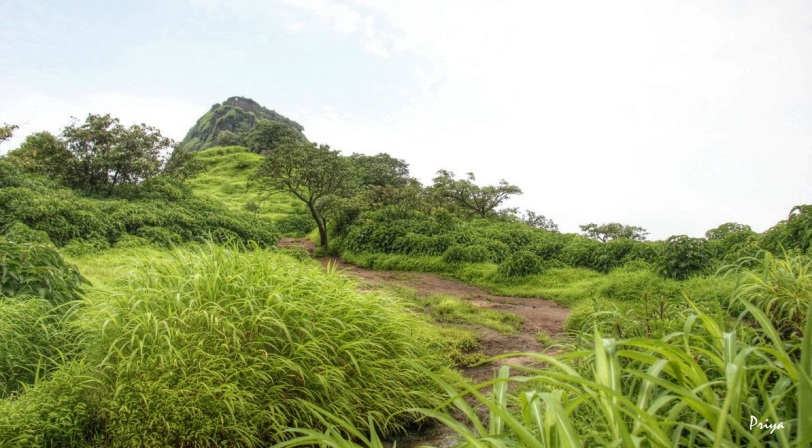 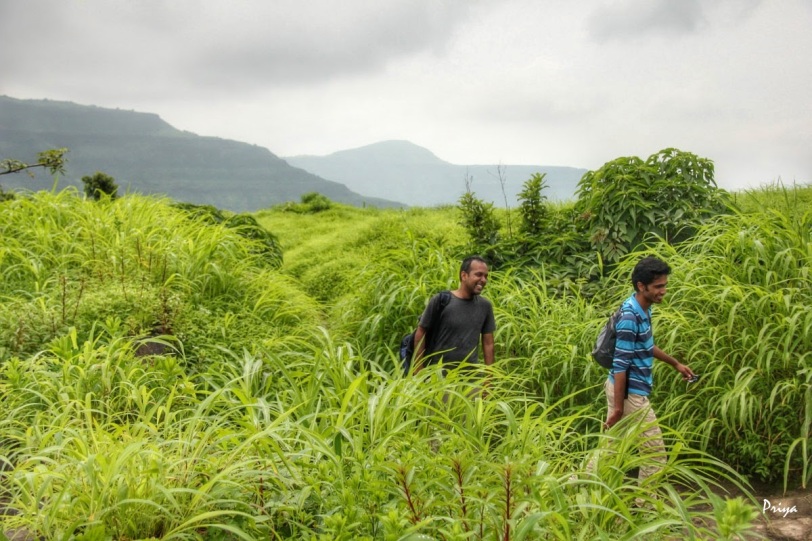 We encountered a huge carving of Hanuman along the way. We also came across a temple across a small lake and a grinding stone, before we reached the main fort area.

The steps here were steep, narrow, uneven and slippery. A thick wire ran alongside the steps, offering some support. 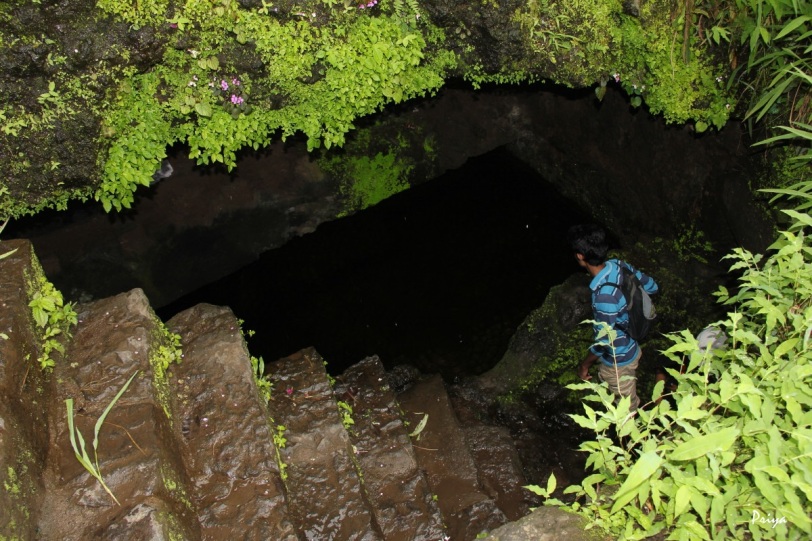 Halfway up the steps, we arrived at a small lookout of sorts, and the view from here was simply amazing! 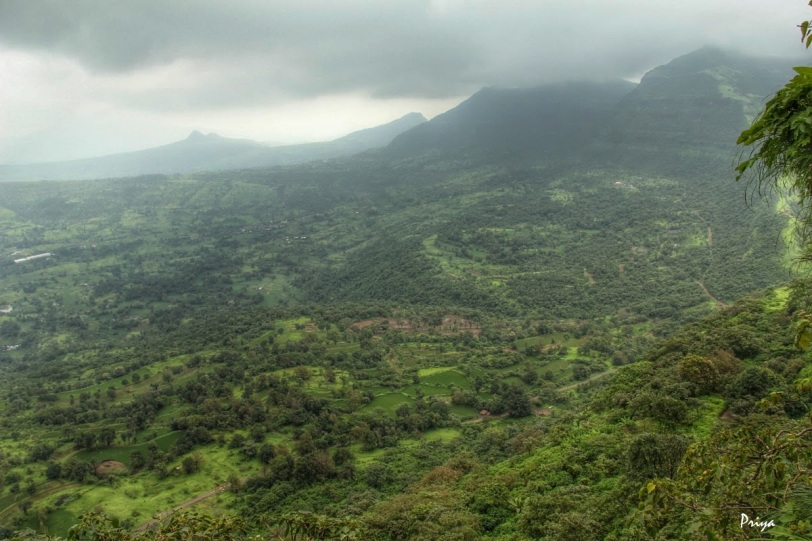 The fort itself was interesting, with its rampart, bastions and the few caves occupying space near the main darwaja. 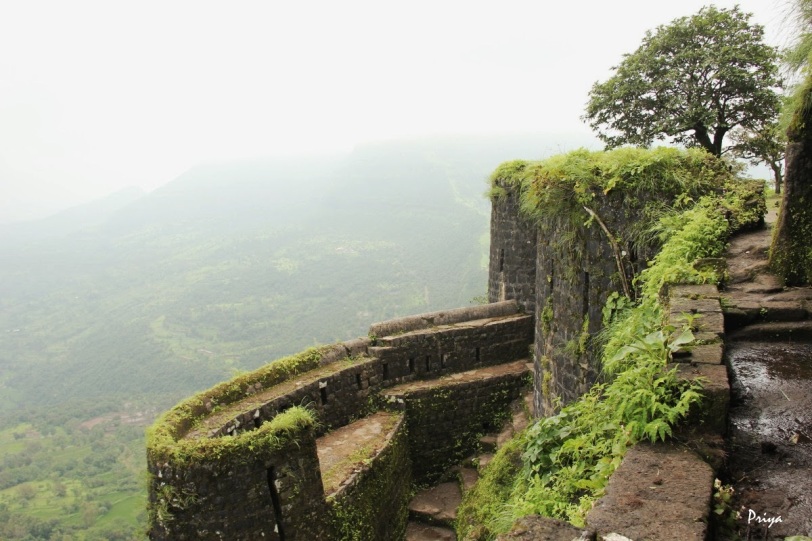 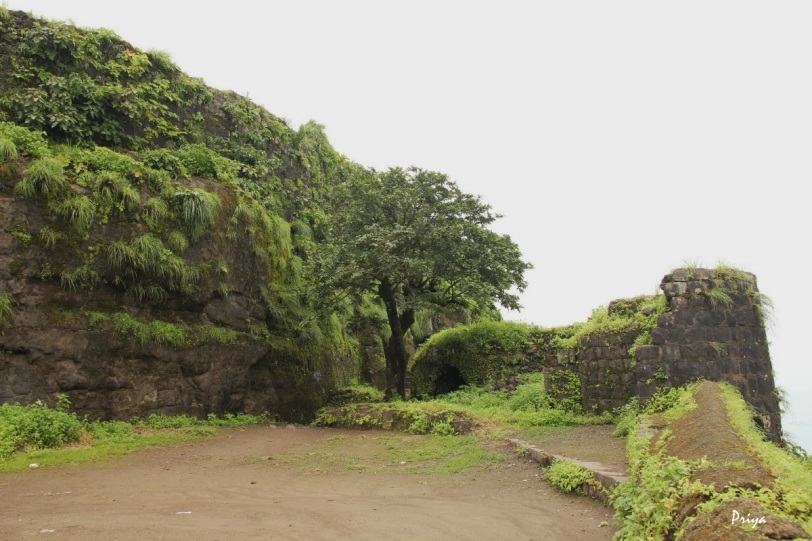 Further up, we came across a temple, and a water reservoir. 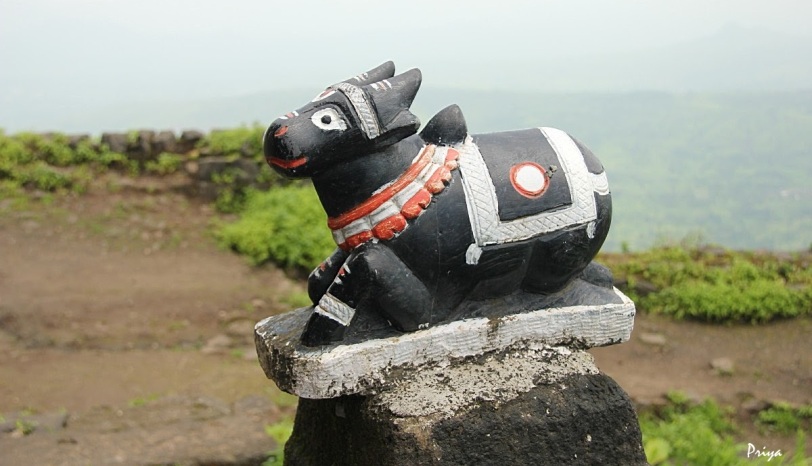 And finally, the last set of steps led to the pinnacle, marked by a small, bright orange flag. We had made it to the top! 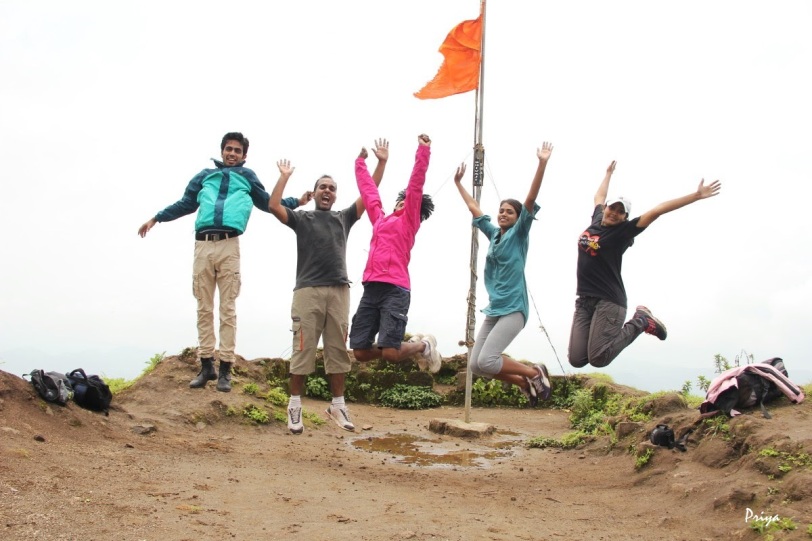 The climb was definitely worth the aerial view of the Pawna Lake and the surrounding ranges clad in emerald hues.

The descent from the fort took us half the time, and even as we were climbing down the hill, we were already looking forward to the next item on our agenda – lunch!

2 thoughts on “Trek to Tikona Fort”