Calcutta loves its maach and its mishti. And more.

There’s a certain Chinese quarter in the city that serves authentic Chinese food in the early hours of the morning. By early, I do mean 5am to 7am early. So I’m guessing, if you want the Chinese breakfast experience in its entirety, you must eat at China Standard Time!

Every morning, Tiretti Bazaar sees a bustle of makeshift stalls offering Chinese breakfast delicacies. A small lane near Poddar Court that’s temporarily converted into a food plaza in the mornings, it’s the place to be if you can manage to drag yourself out of bed at that ungodly hour and make your way through the city to this spot. The timings are more relaxed on weekends, which might explain why there was still a lot of food going around at 7.30am when we visited, Sunday last. 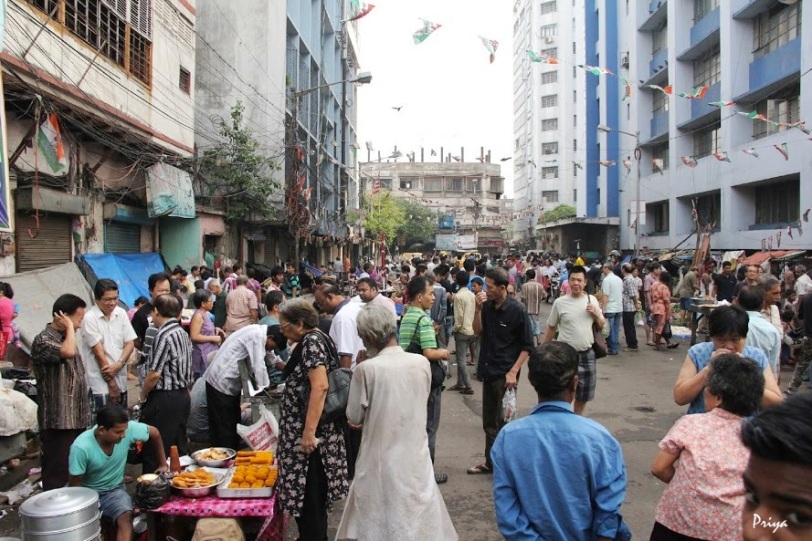 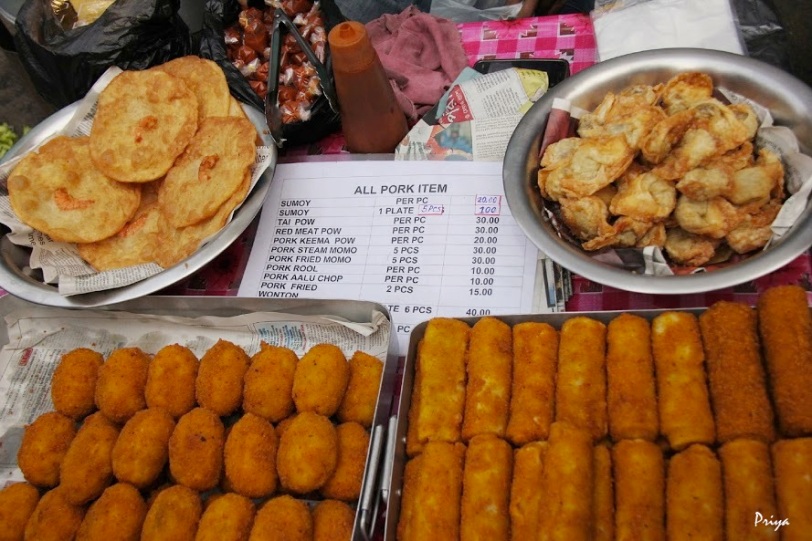 It was fun to just stand around and watch the varieties of homemade food being sold by the Chinese and the sheer numbers out to devour them on a Sunday morning! The wantons and the tofu looked familiar, but that was all. The rest was new to me. 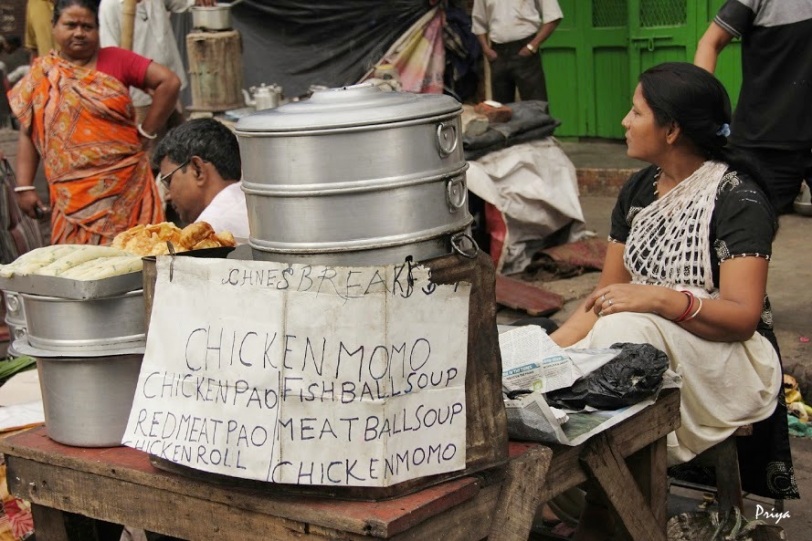 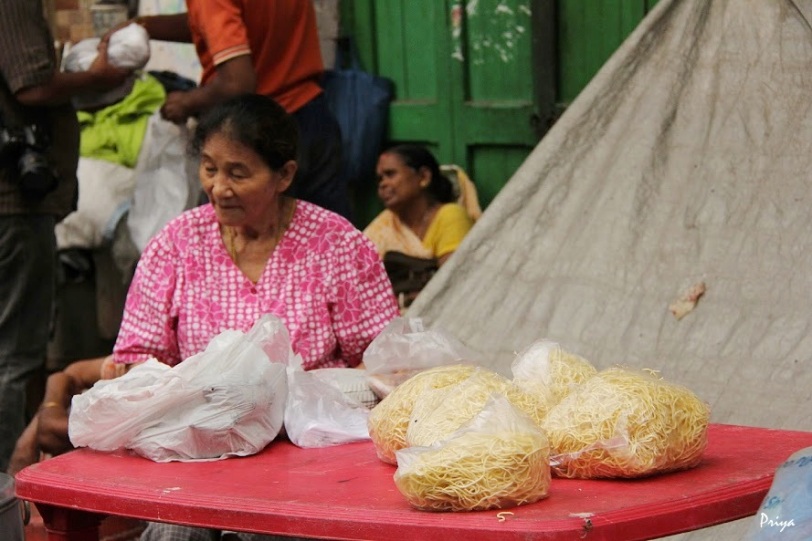 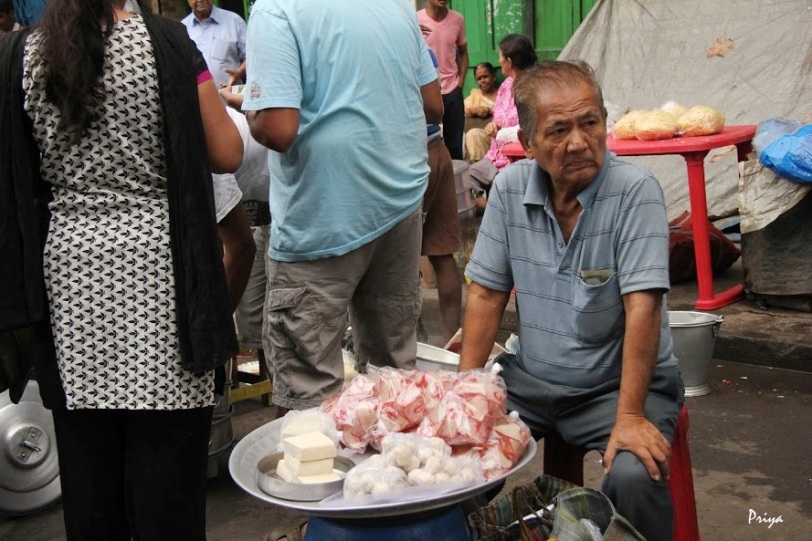 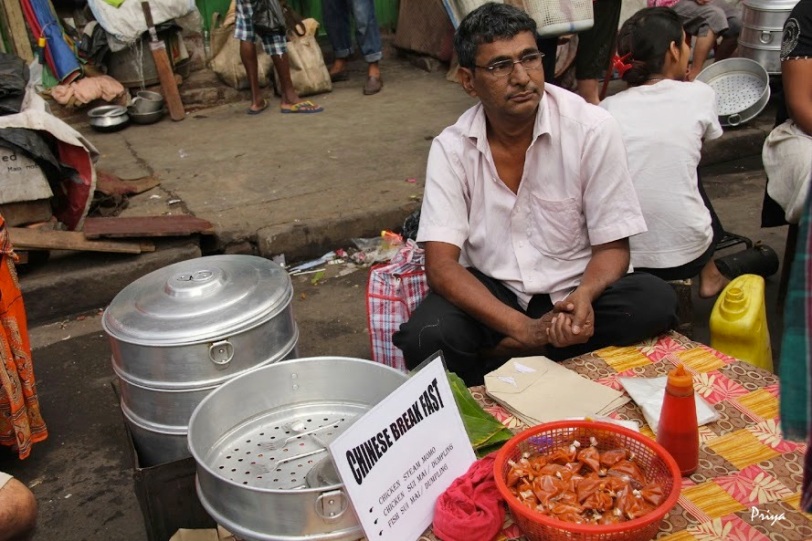 The husband, definitely more adventurous when it comes to trying food, started with a bowl of fish ball soup. Two massive fish balls in a clear broth, for just 40Rs! The broth tasted better than it looked, although I didn’t quite fancy the fish balls. We stood at a roadside table with hungry others and sipped at our steaming soup, adding a dash of soy for extra zing. 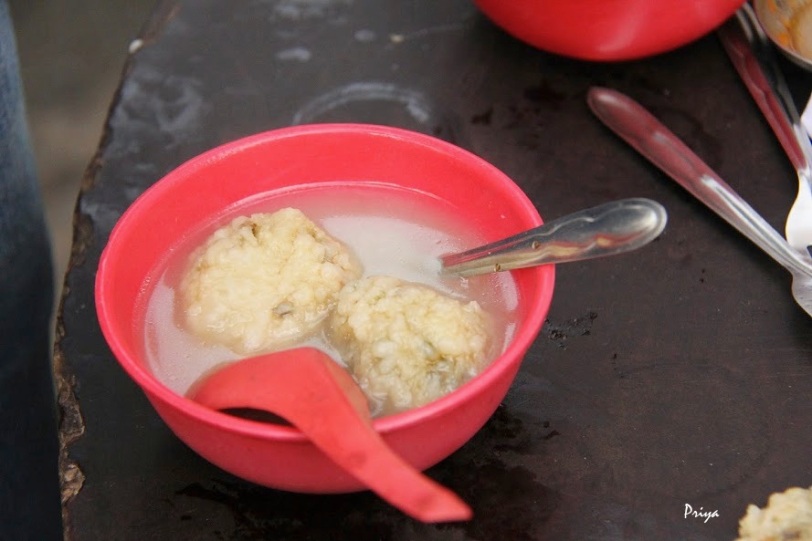 We saw many Chinese buying fish soup in clear plastic bags, and other foods wrapped in paper packages. But the customers weren’t limited to only the Chinese. The food seemed equally popular with the indigenous crowds. There’s something to be said about the Chinese-Bong breakfast connection! 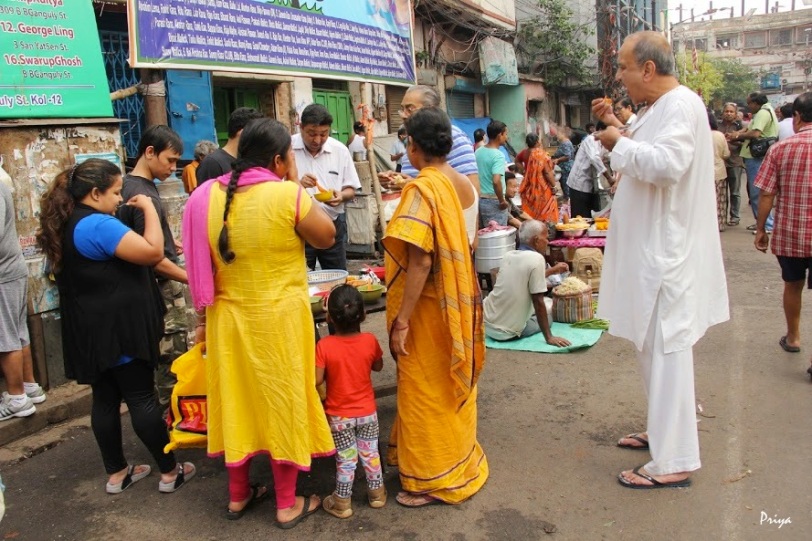 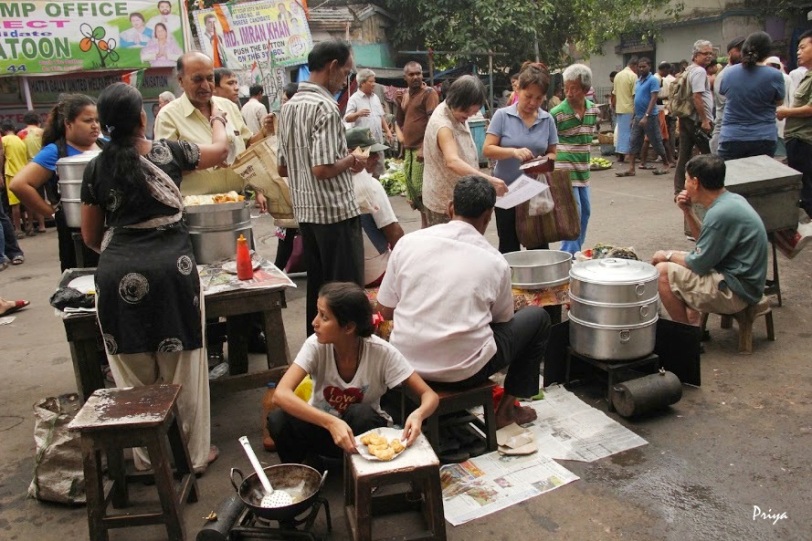 We packed up some momos too, and some pao buns that looked creamy white and unbaked, at first glance. We had no clue what was inside them, but we figured we’d let ourselves to be surprised! We brought the buns home and cut them to discover a deep red filling inside. While the buns were tasty in an undefinable way, slightly sticky, slightly sweet with a savoury filling, we never did manage to identify the meat! If I had to guess, I’d say it was pork. I think. 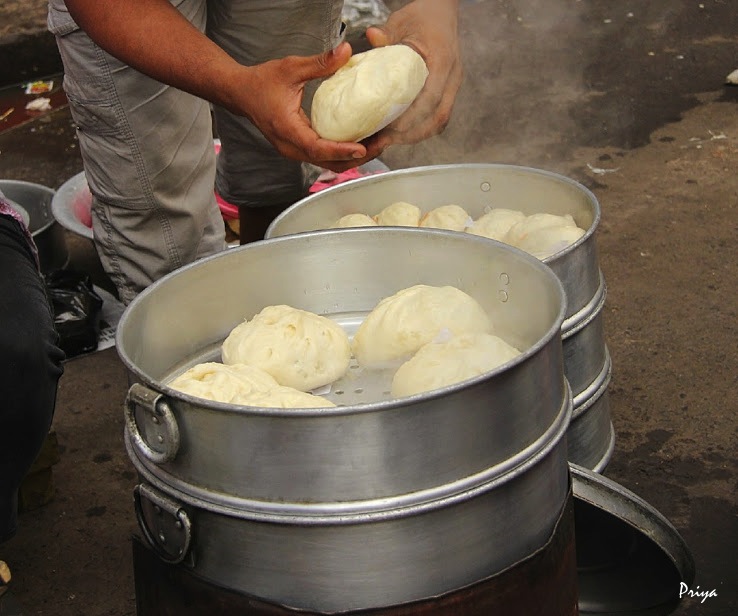 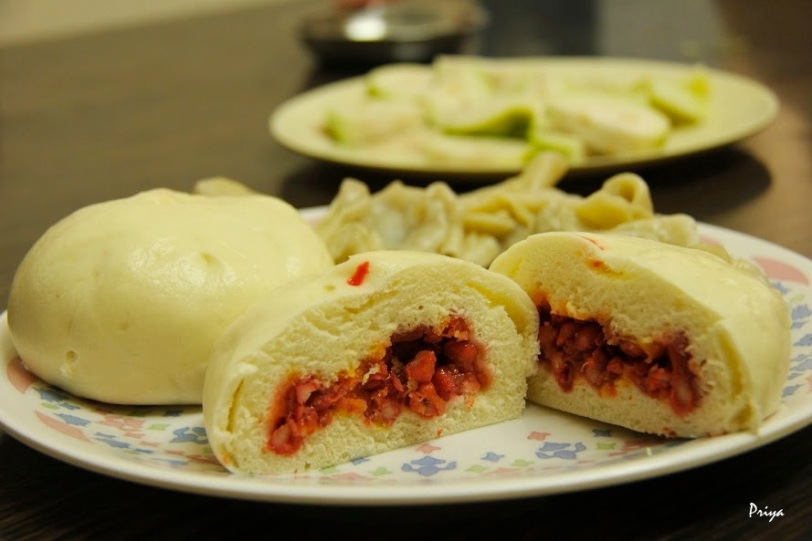 We also wolfed down some steamed momos at the bazaar. With the spicy sauce, they weren’t half bad…although I will admit that given a choice, I’d settle for a crisp dosa with steaming hot sambar for breakfast anytime. But that’s the South Indian in me speaking, and I figure when you’re in the east, you eat like in the east – or in this case, the Far East! 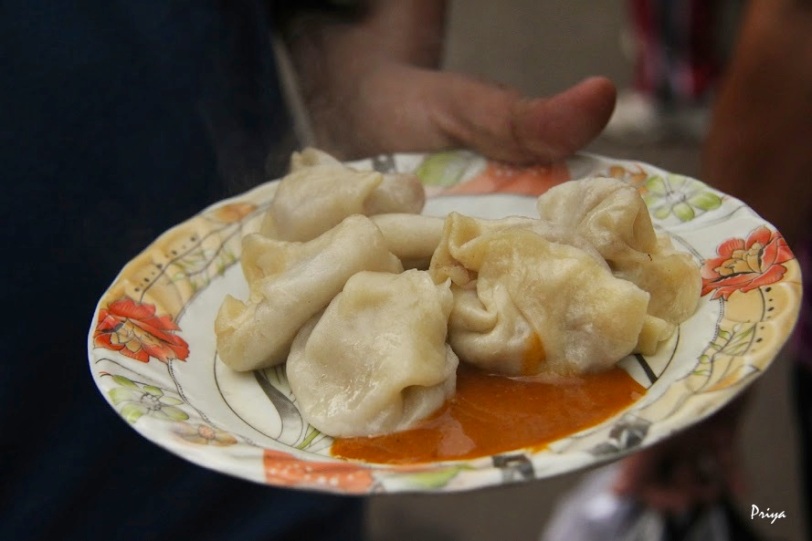 There were other fast-disappearing dishes like prawn chips, Chinese greens, prawn, pork and chicken wantons, dumplings and various fried fare. We didn’t try all of them, but the people munching their way through them looked happy with their meal. 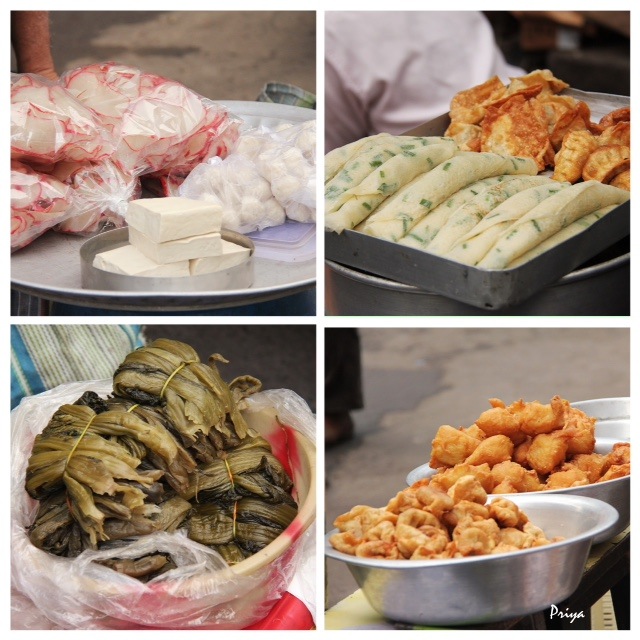 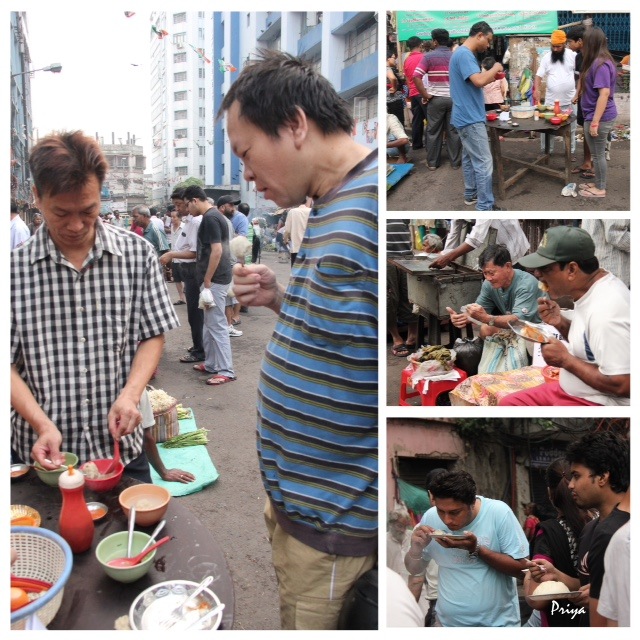 Once home to over 20,000 ethnic Chinese, the population in the city has now dwindled to around 2,000. However, this small, proud group has integrated with the fabric of Calcutta and has learned its language. And this daily breakfast ritual, and the Chinese New Year celebrations that occur with much pomp and gaiety in the city, are opportunities to discover the soul of another great nation. 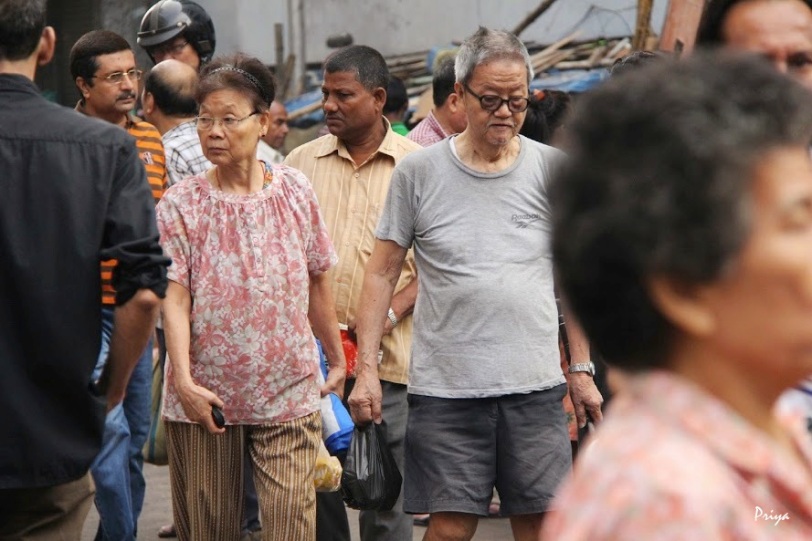 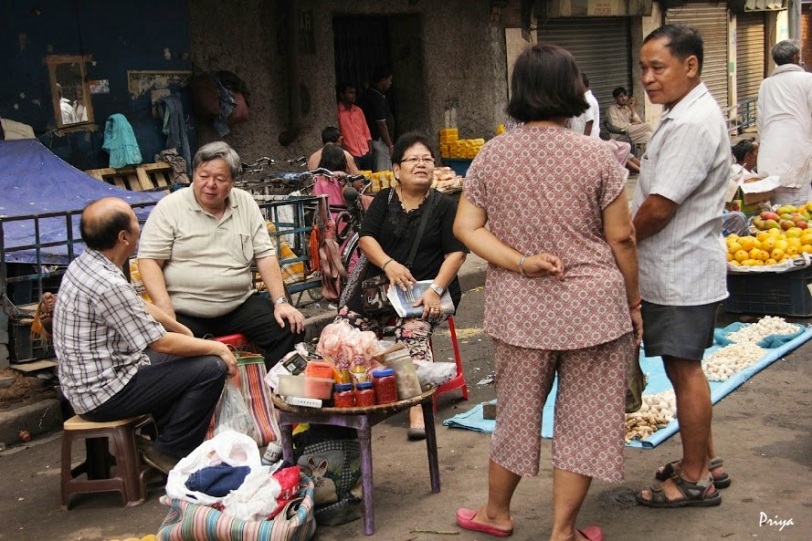 The food may not have impressed as much as I’d imagined, but this was a glimpse into the culture of another land, and an authentic taste of a well-loved cuisine that is in fact, quite different from what is served to us at Chinese restaurants, here in India. And just for that, I was happy I’d gone there, and been a part of Calcutta’s Old Chinatown for a brief part of my Sunday morning.