Around 100Kms from Pune in the direction of Sholapur lies Bhigwan, a small village that becomes a hotbed for migratory birds in winter. Among other birds, the serene backwaters of the Ujain Dam witness the arrival of the Greater Flamingos in January and February – also birders and photography enthusiasts. However, when we visited Bhigwan last weekend, there were no flamingos to be found. A slight disappointment no doubt, but the 2-hour drive from Pune wasn’t wasted if you considered getting away from mundane life for a while and jus’ chilling on a boat.

We left Pune at around 4.30am and made it to the general area by 6.30am. It was still pitch dark and the GPS led us off course through some random, extremely bumpy fields where no sedan should ever have to go. Here we are, in the middle of nowhere, wondering why Google Maps would play such a rotten trick on us and say, “Your destination has arrived”.

A phone call to Mr. Sandeep, our contact at Bhigwan, set us in the right direction again, and a further 2km drive brought us to Kumbhargaon where a partially obscured sign spelled out ‘Flamingo Point’. We turned left off the highway at the signboard and ventured into a kutcha road that led us to the water’s edge, and a waiting Mr. Sandeep.

Dawn was slowly casting its pale colours across the cold sky as we set out on a boat to view the birds.

The first to say hello were the gulls. The boatman threw a few crumbs that brought them fluttering around the boat at the prospect of a meal.

We saw these Painted Storks in the distance, with their bright orange beaks and black and white plumage.

We also saw plenty of these waders. Pond herons, perhaps? 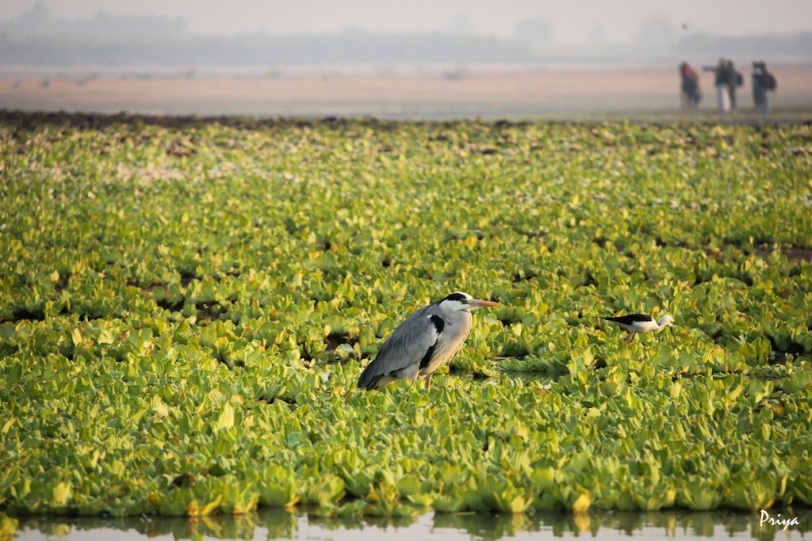 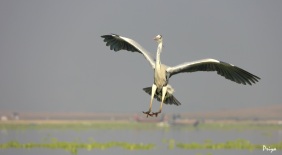 The smaller birds were more difficult to observe from the distance of the boat, although we did identify a few Sandpipers, Pond Herons and Black Winged Stilts. A pair of binoculars would’ve helped. Or one of those insane telephoto lenses that a few photographers were sporting, which would’ve looked great on my camera as well! 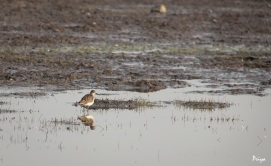 A profusion of geese and ducks also inhabit these marshlands, swimming or flying over the waters.

The boat stopped at an island of sorts where we got down and walked over to the water’s edge on the other side, in the vain hope of sighting the flamingos. We didn’t find the birds, but we did find bird droppings everywhere — a consolation prize that followed us home in a thick layer under our shoes.

Our guide informed us that the low water levels caused by insufficient rains was why the flamingos had flown away. 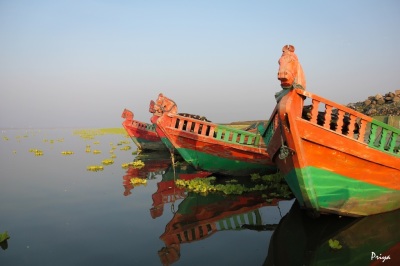 Past 9am, the sun was making its present felt and we had to shed our jackets, scarves and beanies. Also, the thought of breakfast was suddenly more enticing than birdwatching, so we rowed back to where we started out from, paid Mr Sandeep a tidy sum of Rs 700, and made for our car.

Here are a few things to make note of, if you’re planning a drive to Bhigwan —

Bhigwan is a birders paradise, but water scarcity, climate change, intrusive tourism and increasing pollution are slowly taking their toll on this piece of heaven. And the absence of the Flamingos, is just the beginning.